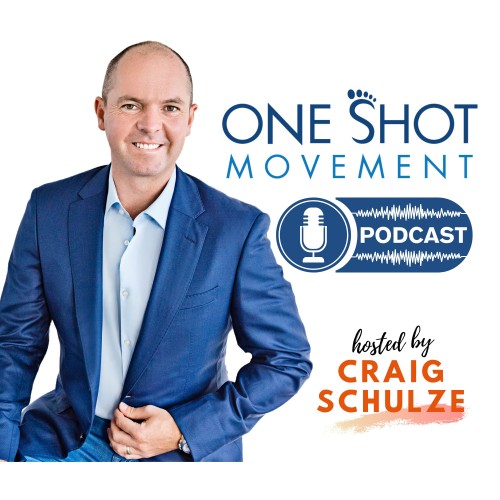 The One Shot Movement Podcast

You get one shot in this life. Are you using it to its full potential? In this series, we'll interview some of the biggest entrepreneurs and get their stories on how they used their "one shot" to take a big leap in their life and business and to get to where they are today. 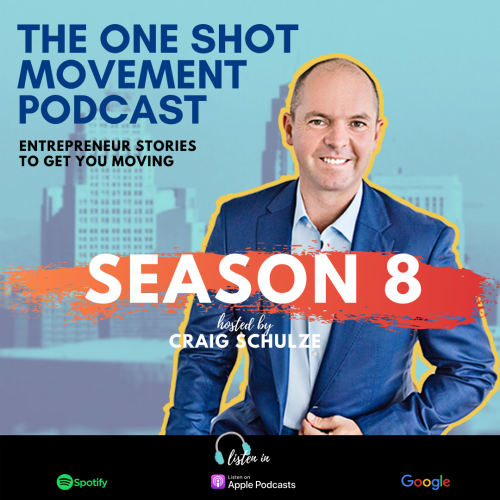 The One Shot Movement Podcast Season 8

Welcome to another FIRE season of The One Shot Movement Podcast. Who's ready to learn more about growth and business? This is your host Craig Schulze. Read more
8:35     Craig Schulze     Jun 11, 2021     0 comments 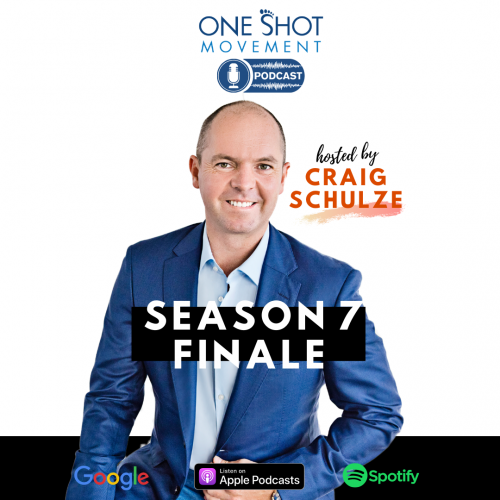 The One Shot Movement Podcast Season 7 Review and Finale

Welcome to another review and season ender for The One Shot Movement Podcast. Season 7 is ending, and we just had an amazing and powerful season. If you haven't listened to the episodes, make sure you do because we've been working so hard to make sure to give you some of the strongest and most inspiring stories we can get. So happy that you are taking leaps to improve your life and business and see you again on Season 8. This is your host, Craig Schulze. Read more
8:15     Craig Schulze     Jun 11, 2021     0 comments 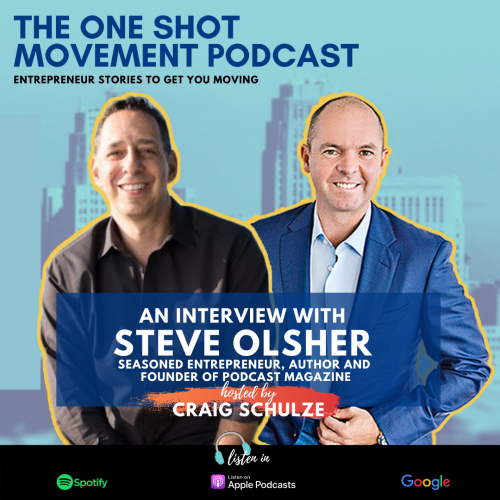 Welcome to another episode of The One Shot Movement Podcast, this is your host, Craig Schulze. Today, we are interviewing one of the seasoned entrepreneurs and one of the biggest in the podcasting scene, Steve Olsher. Listen as we dive in about podcasting, business strategies, and the stories in between. Read more
39:43     Craig Schulze     May 31, 2021     0 comments 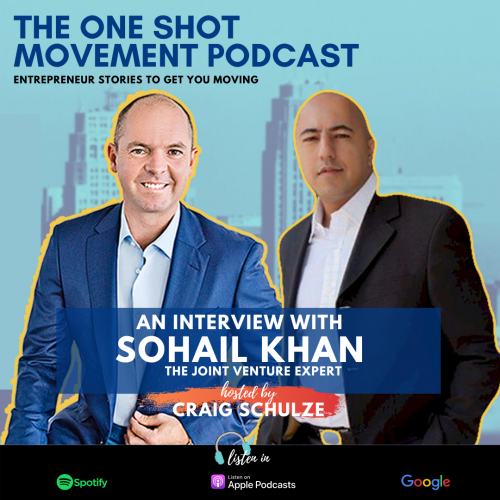 Welcome to another episode of The One Shot Movement Podcast, and I'm your host Craig Schulze. Today, we have the honor to interview Sohail Khan, the Joint Venture Expert. Sohail is the world’s premier ‘Joint Venture Expert’ Founder of The Joint Venture Group and creator of the ‘Million Dollar Partnering System’. A sought after Business Growth Speaker, Coach and Author, Sohail works with Corporate, Business and Educational establishments worldwide. Prior to starting The Joint Venture Group, Sohail has had over 15 years of sales, joint venture marketing and business experience. Having previously built a multi-million dollar online training company which he started with just $1,000 in 2000, he then sold a majority stake to a $150M IT group in 2006. In 2008 the IT group went bust and Sohail lost everything but retained the knowledge and expertise of building a business with over $10 Million in sales using just joint venture partnering. In 2009 Sohail set himself a challenge to make $1 Million within 12 months using nothing but just his joint venture marketing expertise and managed to close a $1.5 Million joint venture in just 30 days. Today, you'll hear all about his stories and challenges, and how he lost it all and gained it back again, and I'm sure there's a lot for us to learn from this episode. Read more
56:50     Craig Schulze     May 25, 2021     0 comments 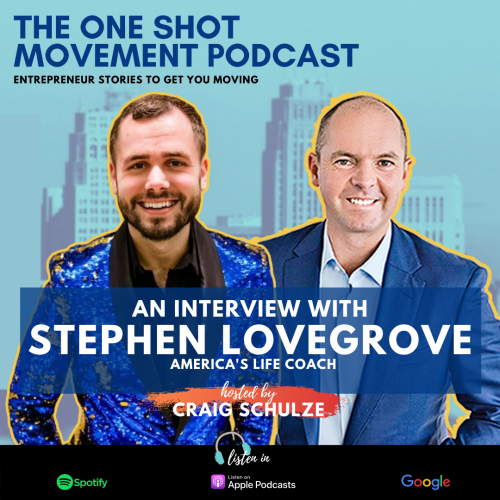 We are here in The One Shot Movement Podcast, with an interview with America's Life Coach, Stephen Lovegrove. America’s Life Coach, Stephen Lovegrove is one of the fastest growing names in personal development. After a traumatic childhood as a gay child in a fundamentalist cult, Stephen restarted his life and created the life and business of his dreams. Author of the international bestseller, “How to Find Yourself, Love Yourself, and Be Yourself: The Secret Instruction Manual for Being Human,” Stephen now supports entrepreneurs and entertainers in changing their lives from the inside out. From Billboard chart toppers to household name CEOs to national television stars, Stephen is the go-to coach for influential people who need something to shift - and shift NOW. With over 100,000 fans globally on social media and repeatedly ranking as the number one life coach on Instagram, Stephen is a prolific media personality, featured in CNN, NBC, MTV, CBS, Inc, and USA Today ... just to name a few. Read more
39:56     Craig Schulze     May 20, 2021     0 comments 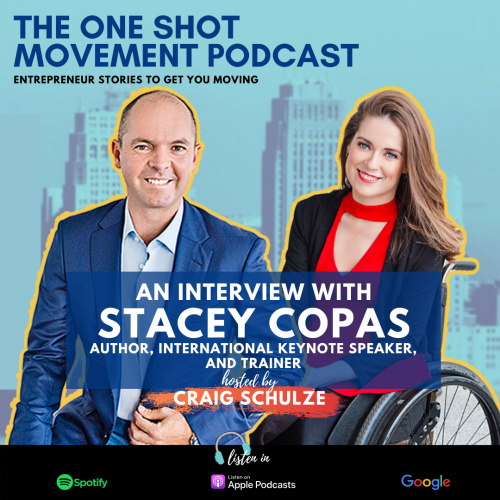 Today is a big and inspiring episode for all of us. Welcoming Stacey Copas, author of How to be Resilient, Founder of Academy of Resilience, International Keynote Speaker, and facilitator. Stacey Copas is someone who has "come back" from adversity. Listen to this episode as she shares how her life completely changed from what she planned because of a huge accident that left her unable to walk for the rest of her life, and what she went through to reach where she is now. She travels the world, wrote books, and has a training academy to inspire thousands of people to keep pursuing their dreams, amidst the biggest obstacles in life. This is definitely an episode not to miss. This is your host of The One Shot Movement Podcast, Craig Schulze. Read more
45:50     Craig Schulze     May 8, 2021     0 comments 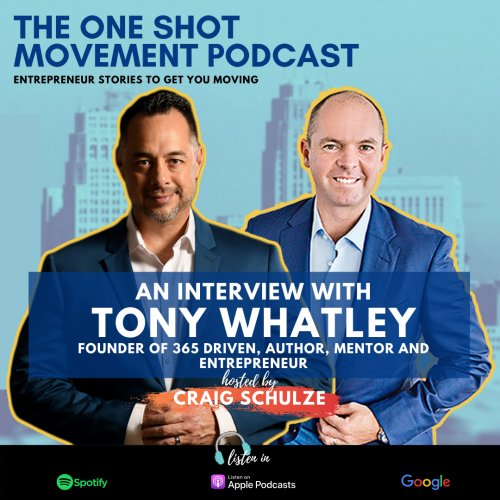 Interview with Tony Whatley - Founder of 365 Driven, Author, and Entrepreneur

Here's to another amazing podcast episode with our guest for today, Tony Whatley of 365 Driven Podcast. Tony Whatley is an entrepreneur, business mentor, best-selling author, podcast host, and speaker. He is best known as Co-Founder of LS1Tech, an online automotive community which grew into the largest of its kind. This website grew to over 300,000 registered members, and was later sold for millions, in only 5 years. He is now the host of 365 Podcast. In today's episode of The One Shot Movement Podcast, Tony will share to us his story and the ups and downs of business and life, and how to get back up again. Hope you learn a lot from today's episode. This is your host, Craig Schulze. Read more
1:06:11     Craig Schulze     Apr 29, 2021     0 comments 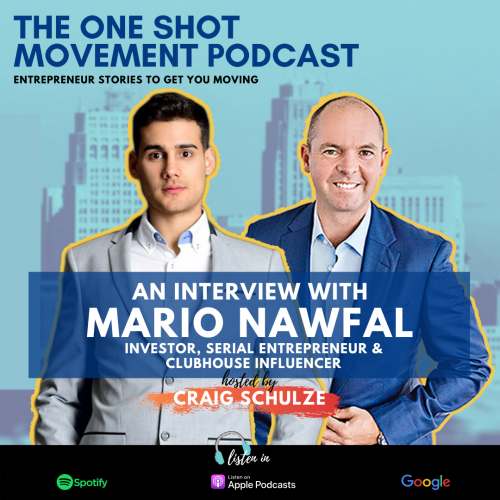 Mario Nawfal is the Founder of the Athena Group of Companies, a business conglomerate that operates in more than 40 countries, and he is our guest in The One Shot Movement Podcast today. Mario Nawfal has founded so many companies, and is currently building his Growth Hacking Agency, and just blew up as one of the biggest influencers in Clubhouse to date, with 50K followers. In this podcast, he shares to us his ups and downs, and why even if he has more lows than ups, is he continuing in the entrepreneurial race. This might be the inspirational journey you've been waiting for if you are currently experiencing some tough times yourself. Listen in to today's episode, and get fired up on your own move in designing and living your dream lifestyle. This is Craig Schulze, your host for The One Shot Movement Podcast. Read more
43:03     Craig Schulze     Apr 23, 2021     0 comments 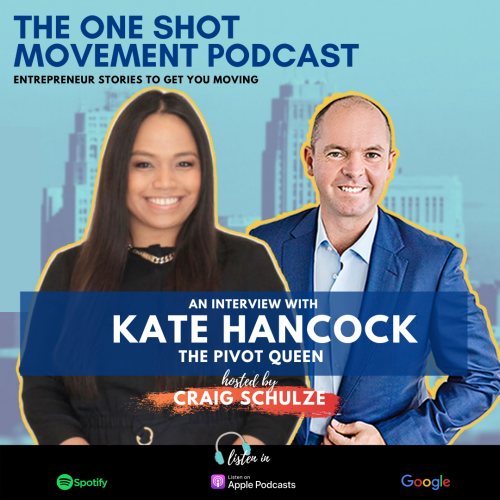 Today's podcast episode is a very special one as we interview Kate Hancock, Filipino- American entrepreneur, who is known as the Pivot Queen. She's a top host in Clubhouse, and has hosted one of the longest running Clubhouse chats, 20 days non-stop. She's a serial entrepreneur and in the top 100 Filipino influential people around the world. We are here to listen about how she started her business from $20 to 15 million dollars in sales, and how she pivoted when the challenging times started. Entrepreneurship is never an easy journey, so we are excited to hear Kate Hancock's experience, advice and how she managed through all of her business ups and downs and how she wants to influence more entrepreneurs with her success and experience. Make sure you sit down, enjoy and take notes and keep inspired to take advantage of your one shot at life! Your host, Craig Schulze and this is The One Shot Movement Podcast. Read more
33:44     Craig Schulze     Apr 19, 2021     0 comments 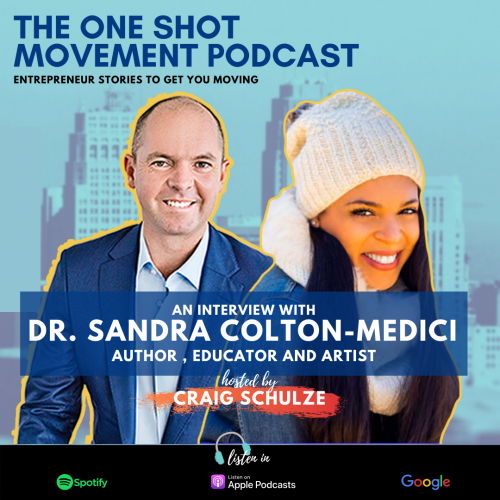 Welcome to another episode of The One Shot Movement Podcast, hosted by Craig Schulze. Today we interview Dr. Sandra Colton-Medici, author, educator, and artist. Dr. Sandra Colton-Medici is a digital strategist and online business educator helping freelancers and soloentrepreneurs monetize their passion projects. Not only that, she's also an artist. Sandra Colton-Medici appeared on Lifetime's hit show Dance Moms, was a top finalist on Season 1 of FOX’s So You Think You Can Dance, has performed on The Tonight Show with Jay Leno singing backup for both Paulina Rubio and Katharine McPhee and danced in music videos for Snoop Dogg, Justin Timberlake, Chelo, The Game, Katharine McPhee, Raphael Saadiq, Marie Serenholt, Cascada and Too Short. Talk about a multi passionate entrepreneur. In this episode, we'll learn about her journey in business and the entertainment industry, how she juggled multiple passions through the years, and how she's navigating business this pandemic to continue to provide solid value for her audience. Make sure you listen closely to today's episode and keep the fire alive for your own business and life goals. Read more
52:24     Craig Schulze     Apr 17, 2021     0 comments 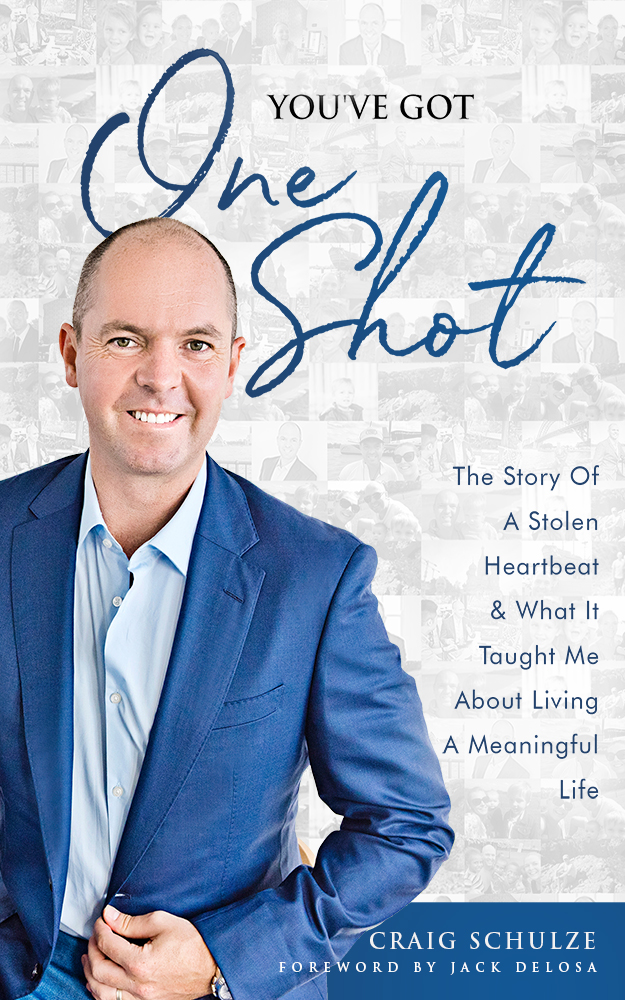